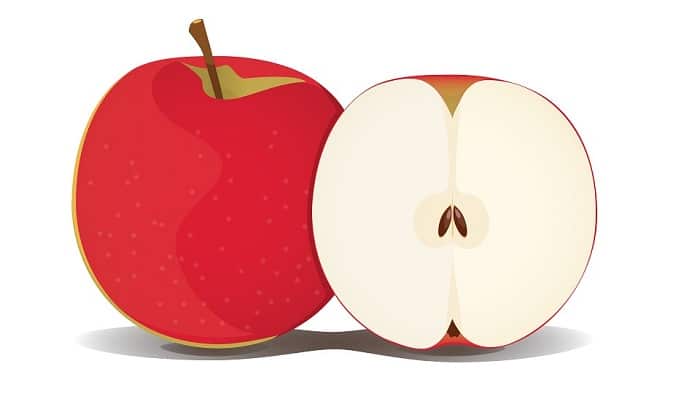 You perhaps know the old proverb that an apple can help everyone to avoid a visit to doctor. However, is the same fact true in case of your cute canine friend? This question arises in the mind of most of the dog owners.

As one of the dog owners, you perhaps feel sorry while you see that your furry pet gets bored with the same meal that you offer every day. That is why you possibly like to add some fruits like apple, or maybe a bit of kiwi. Whether the apples are really the safe option for your dogs is the issue that occurs, particularly when the pets have grabbed a slice of apple from any kitchen room or have swallowed an apple during a family picnic.

The slices of apples, with the seeds, removed from the core, have a wonderful taste. In fact, the apples can be the antioxidant and high fiber snacks for any kind of dogs. A reputable medical officer, Dr. Oscar E. Chavez has stated that some of the old dogs have the tendency to suffer from particular diseases, and these dogs should restrict their meaty meals because of the protein controls, or follow a low fat meal. As the apples have very low amount of fat and protein, they can be bets foods for those dogs.

However, these benefits may be obtained not merely by the aged dogs with health problems. The doctor has recommended that the younger pups may also attempt to get the antioxidants and Vitamin C of the fruit. The vitamin can help to cure the degenerative states, such as joint disorders, while the fiber may also solve the general gastrointestinal fitness.

Among the other benefits of apple is that this fruit has very low sodium. But, it contains more phosphorus and calcium. The fruit may also be able to enhance the skin of the dogs, by increasing the omega-6 and omega-3 fatty acid in the meal. The skin allergies can be prevented and your dog may gain a shiny coat.

You can also plan to provide your dog with the products that are based on apple, for example, apple cider vinegar. This product may be very powerful flea-control wash after shampoo. This may also be utilized as flea-control spray while combined with some water. Moreover, it may also assist to remove the odor on the skin of the dog.

Besides, apple cider vinegar (one teaspoon) mixed with dog’s food plate or water a number of times every week will enable to lessen the medical symptoms of arthritis as well as other kind of chronic diseases. It can also boost his hunger and alleviate the digestive upsets.

Several apples may not be healthy option

In many cases, it may not be a better plan to give apples to the dog. For example, when your pet has some kidney disorder, the extra amount of phosphorous, calcium and fatty acids may have to be taken into account in view of the remaining part of the diet. If you have arthritic dogs, then also you should observe the level of fatty acid.

Again, to some dogs, the major issue that they experience with apples is, in fact, diarrhea or the disturbed stomach, when they consume a large number of this fruit. Check the intake of apple by your dog to make sure of the good health.

Apple seeds and stems – are they good?

It is to be noted that the fruits must be provided to your dogs in moderation. Make use of the apples in order to add-on smaller parts of the standard food. Try to add the fruit to the regular diet slowly.

Though reasonable quantities of an apple’s flesh is quite safe for any canine animal, you have to be careful, while offering this food to your pet because the layer of the apple’s seeds have minute some amygdalin, a substance, which consists of cyanide.

In fact, there are also some proofs, which indicate that the stems can also consist of a little cyanide. Thus, it is better to peel off them. The harmful can happen, while the coating of the seed gets broken and it discharges amygdalin. Thus, when a dog devours a number of seeds completely without breaking them, he may be fine.

Though it is improbable your pet would chomp enough number of seeds and become ill, it is safer to take away the stems and seeds prior to serving any apple. However, some apple seeds are not expected to harm the dog, consuming them several times may cause the cyanide accumulation in the dog’s system. Besides, the seeds may also pose the choking hazard.

Also be careful about feeding dried out apples because these apples may consist of all the nutrients (like hydrated apple) but do not contain water. Thus, just feed a small dried apple piece to stop stomach upset.

Many people also ask – can dogs eat green apples? The green apples may hurt but not all the dogs.

Thus, keep in mind that all the dogs are different. Each of them reacts to fruit in a different way. You perhaps have a dog, which has problem in digesting apple. Thus, take some time in order to gradually add the fruit to the dog’s diet. Watch of the reaction of the dogs system before choosing it as staple food. When the dog suffers from cancer or diabetes, you must remember that apples have sugar. You must talk with a vet regarding the effect that fruits may give on the dog’s health.

Know about the apple-based recipe

To make apple sauce cubes, you have to take a number of apples. At first, remove the coat of those apples, and then slice the fruits into some large pieces. You may utilize apple peeler, which may also slice. Place the fruits in a blender or juicer, and store the pulp. Blend all the things together. You may add some water if you like to make the blend and the apple juice more consistent (speaking of juice, dogs can enjoy orange juice too in moderation). Then, put some cinnamon. (Never replace cinnamon with nutmeg, which may be detrimental to dogs). Preserve apple pulp or sauce within ice trays just for fun. Offer it to your dogs to provide a cool treat.

There is another apple-based recipe for your dogs. You have to, at first, preheat the stove to about 350 degrees. Slice apple to make fine bits. All ingredients (honey, water, cinnamon, honey oatmeal, apple) excluding the flour. Slowly crease in flour to make the dough firm enough to compress. You may crash this dough in balls and even out. Roast this for half an hour, and then add a bit of peanut butter on it, if necessary. Cook again for minutes and allow it to be cool.

It may be concluded that the apples are not always recommended for your dogs; however, they may be fed on some occasion. One minor disadvantage is that the fruit in few rare cases cause the discomfort in stomach. However, it never leads to the long term issues.

Remember that the natural instinct of any dog is to find a prey. In fact, dogs are hunters which consume meat. But, it may not be any serious problems, if your dog eats an apple not as a regular diet.