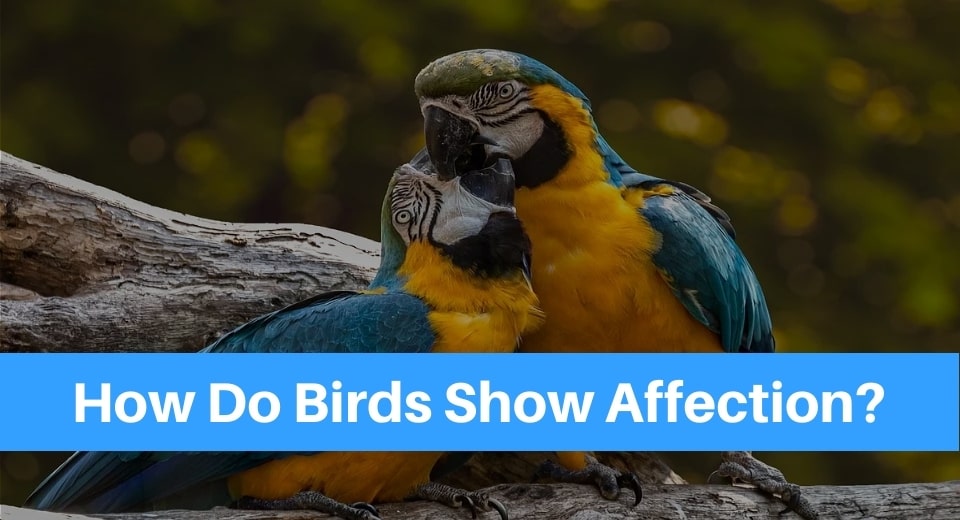 Birds are the third most popular pets in the world, ranking only behind dogs and cats. Despite being so common, these feathery friends are hugely misunderstood. Many believe that pets should be an extension of the family and the best ones are the most loving companions, which most people don’t believe applies to birds. In reality, birds are incredibly affectionate but show it in different ways. So, how do birds show affection?

How Do Birds Act?

Birds are complex creatures. Through the years, much has been discovered about them in domestic and wild settings but, of course, it remains a continuously developing area of research. That said, what has already been observed makes it clear that birds are awesome pets.

First of all, birds are extremely intelligent and easy to train. They use birdsong to communicate with their flock over vast distances and have been observed to play with objects and other animals. Additionally, they can even see a full spectrum of colors and, in the case of parrot breeds, can mimic sounds and gestures they observe.

As pets, birds require less immediate care and maintenance than other pets. They're extremely neat and regularly groom themselves. Their neatness also shines in how they keep their living space clean by limiting their droppings to a certain area separate from where they live.

Furthermore, birds have a wide range of emotions. This is particularly evident to bird owners since they’re able to bond with them and recognize the individual personality traits of these avian creatures. Birds use their body and voice to express their fright, anger, joy, depression, and even love. They're likewise known to protect and share resources with those they care about, and comfort grieving birds.

Furthermore, birds are incredibly social and affectionate. Their affection is not limited to similar animal species but can be given to anyone they connect and bond with. They're not shy in asking for attention as well as in expressing their own fondness for you. Lacking affection can actually be a huge issue for them.

The most recognizable sign of their affection is when your pet bird cuddles up to you.

Whether you've just come home or you’ve been with your bird the whole day, they will cuddle you when they get the urge. They do this by sticking close to you and rubbing their head or beak against your hand, neck, cheek, or any body part in reach. This only happens when they feel safe and often do this as a sign of their love and comfortability with you.

Sometimes, bird cuddling will also be paired with some light nipping or kisses on your skin. They typically only start nipping at your skin when they’re not receiving the attention they want and get you to notice them. Birds kiss by putting their beaks against your skin and pressing lightly, sometimes also licking or even making a smooching sound. They could also cuddle up extremely close to you as a way of asking you to pick them up or pet them.

When birds want to show affection, skin contact is one of their favorite ways of getting it. If they feel particularly safe and secure, they’ll even sleep near you.

Bird vocalizations can manifest in many ways and could mean many things, including that they want to show some love.

Singing and chattering can be one way of calling your attention. It varies with each bird but some make this noise to get you to watch them, communicate something with you, or simply remind you that they exist. Since making any noise reveals their position, they mostly only do this when they feel safe and comfortable in your presence. Being vocal is also a good sign of their happiness and health.

They could also start calling for you, loudly and urgently, by screaming or squawking. If they make this noise, it could because they’re worried about your safety and want to check up on you. They’ll do this if they haven't seen you in a while and will keep doing it until you call back or they see you. That said, if any sign of your presence doesn’t calm them down or they sound extremely distressed, something could be wrong.

Sometimes, birds even purr to show they're happy. Rather than the sound of cats purring, bird purring sounds like a gentle growl. That said, this is less common to hear, although it does happen.

Birds regurgitate food when mothers feed her young, and when mates and members of the flock share their food. Unusual as it is to hear, regurgitation is a sign of their affection.

If your bird keeps regurgitating its food and giving it to you, be aware that that's their way of trying to feed and care for you, which they only do for those they trust.

It sounds unpleasant and often leaves owners at a loss on what to do. Many new bird owners might even be concerned by it and confuse it for vomit! While it’s usually a great sign of how much they love and appreciate you, if you feel that their actions are particularly concerning, it’s best to consult your vet on what to do in response.

When birds preen, they put themselves in a vulnerable position because they have to bend their heads and compromise their vision for some time. Because of this, birds only preen themselves when they feel comfortable and safe.

If a bird starts preening near you, it shows that they trust that you won’t harm them and also that you’ll protect them. In the wild, birds will also preen one another as a sign of affection. If you have bird pairs and see them burying their heads into each other, it’s an amazing sign of their bond.

Often, owners will also be preened by their birds. If your feathered friends suddenly start going near your head and chewing on your clothes, hair, and ears, this is a great sign of affection and trust. It also shows their desire to bond with you. When they preen you, you might feel a little ticklish from it or even nervous about what they’re doing. However, have no fear because they’re usually very gentle in trying to groom you, and rejecting their advances might elicit some frustration from them.

Body language is a huge indicator of what your birds feel. Their signs of aggression are quite obvious through their body and, luckily, so are their signs of affection!

Similar to excited dogs, a bird’s tail movement can also show affection and excitement. When their tails move around and look like it's wagging from side to side or bobbing up and down, it shows joy and contentment. Moreover, if they start doing this when they see you, it could also mean they're happy you're there.

If you arrive and see your bird flutter and stretch their wings without taking flight, it's their way of greeting you with excitement. When they do this, it's a positive sign that they enjoy your presence.

Birds are extremely affectionate creatures and, when they love you, they will actively express it.

Their feelings of excitement, contentment, safety, care, and love are all noticeably seen in their actions. At the end of the day, the way your bird demonstrates affection will always depend on their personality but these are five common ways that birds do it.

Although having birds as pets is less understood by those who haven’t experienced it, birds are no less affectionate and lively than furry pets. A bird’s presence can enrich your life in unique ways. Birds show their love and affection differently than what most are used to but being on the receiving end of a bird’s affection is no less rewarding than with any other animal companion.