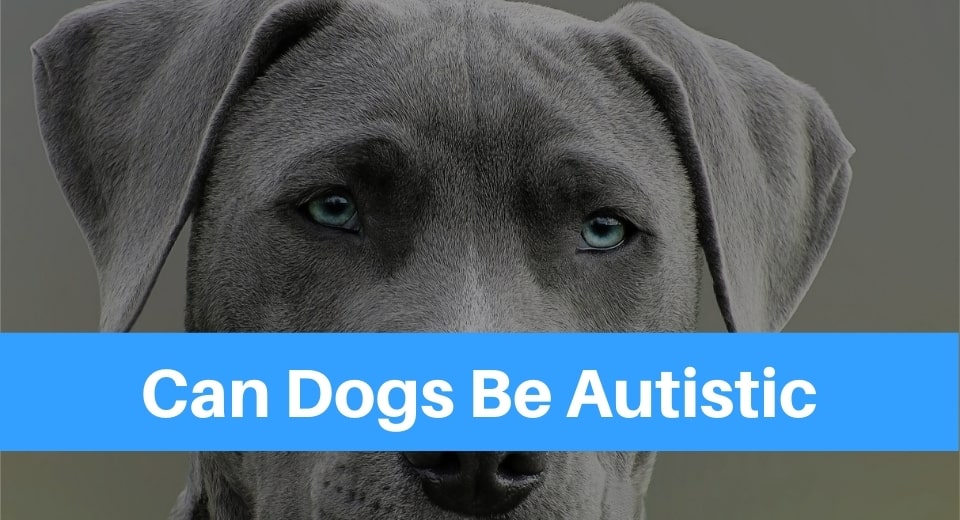 Sometimes dogs have similar reactions to the world as humans. Also, it may happen that they have symptoms of many human diseases. So, there is a question if dogs can have autism. Since long ago experts have been discussing this topic. Many researches have been done, but it is not still clear if dogs can be autistic or not.

In this article we will try to give you the most suitable answer to this question. We will take into account all studies that have been conducted until now and we will explain you autistic symptoms that dogs may show.

If you are a dog owner, then you will certainly like this article. But, before we tell you the answer to this question, we will give you some basic information about autism in general.

As you have probably heard, autism is a mental disorder that is diagnosed in children younger than three years old.

This disorder is not curable, so people learn to live with it the whole life. people who are suffering from this disorder require special treatment and care. They need someone who will give them support and love and who will learn them to love themselves. Autistic people are considered dfferent from other people, so they lack of self-confidence.

Most important characteristics of autism are problems in verbal and non-verbal communication and poor social interactions with other people. Autistic people have difficulties to create social relationships with others and they have also some repetitive behaviors.

Also, they have poor eye contact and they prefer to be alone. Sometimes they use unnatural tone when they are speaking and repeat some words or phrases. Also, autistic children are not able to start conversation and they never show their emotions. Sometimes it happens that they cannot understand some questions that are very simple or that they are not able to make a sentence and to say something.

There are also some other symptoms related to autistic persons. They have usually repetitive and uncontroled movements and sometimes their body language is too exaggerated. Sometimes they may focus on something and stay long time in that position. Autistic persons usually eat only certain foods and they may be very sensitive to touch, light or sound.

These are some of the most important characteristics of autism. It is not hard to recognize children and people that are suffering from this disorder. But, if you are a dog owner, you may have noticed some weird habits and behaviors of your dog, so you may be wondered if your dog has autism. Below you will get the answer to that question.

Can Dogs Have Autism?

Most studies have shown that it is very possible that autism occur in dogs, but more research has to be done. Autism is one of the canine conditions that are very difficult to diagnose, so there is still no a final answer. Most vets don't want to diagnose dogs with autism although dogs may show many symptoms of this mental disorder.

Actually, it is believed that if dogs were vaccinated or if they have been exposed to toxins, it may lead to autism in their puppies. However, there are not scientific proves of this theory.

So, we can say that canine autism is something that should be researched more. Although dogs may show the same symptoms of autism as humans, we cannot say that dogs may be autistic. A final answer to this question is not still found, but we will tell you now what symptoms in dogs may be associated with autism. If you have noticed any of these symptoms, we are sure that you are worried about your dog's health.

There are many of autistic symptoms that you can notice in your dog. If your dog is still a puppy, you may notice that it is not interested in any interactions with its siblings or with its mother. Don't worry, eating poop is not a symptom and is completely natural for some dogs.

Also, autistic dogs are not interested in eating and playing with other dogs. They don't like new situations and they need to feel safe. These dogs have restricted behavior and they want to do only a few activities. Autistic dogs are not able to show their feelings. They are not able to show happiness, joy or maybe fear. Looking at your dog, you cannot know what he means and how he is feeling at a certain moment. But there might just be certain breeds that look like huskies that might just have that temperament as well.

If you notice that your dog is staring at a certain object or at the floor, then it may be the sign that your dog is autistic. Also, dogs with autism may be very sensitive to noise and they can show some unusual fears. Repetitive actions are also one of the most common autistic symptoms, for example tail chasing or circling.

There are also dog owners who noticed that their dogs are organizing toys and other things according to their color or sizes. It is also one of the symptoms that autistic people may show.

If you think that your dog is autistic, you should find out what is the main cause of his weird behavior and you should avoid it. For example, if your dog shows an aggression or if your dog is afraid in contact with strangers that you meet at the park, it is best to avoid that park. In this case it is best to choose some quiet places and to walk there with your dog.

You should know that autism is not curable, but there are some things that you can do for your dog. First of all, you should pay more attention to him and make him feel loved and safe.

Also, you should keep the routine of your dog and you should never force him try new things.

To sum up, dogs may show many symptoms of autism, but it doesn't mean that they are really autistic. If your dog has difficulties in interactions with other dogs or people, it may be a sign that something is wrong with your dog. Restricted behavior and repetitive actions may be symptoms of autism in your dog.

But, it is also possible that your dog has some other behavioral disorder, so it is best to take him to the vet.

As you have seen, there are different opinions about autism that may appear in dogs. Some veterinarians think that canine autism may exist, while others consider that it is unlikely to diagnose a dog with this mental disorder.

However, a final answer has not been found yet. It is necessary to do more researches in the future. A similar question has been made in felines: can cats have autism?

We hope this article has been interested for you.

Also, we are sure that now you can understand better your dog's behavior. If you notice that your dog has any of the symptoms that we have mentioned, we recommend you to seek medical help for your dog.