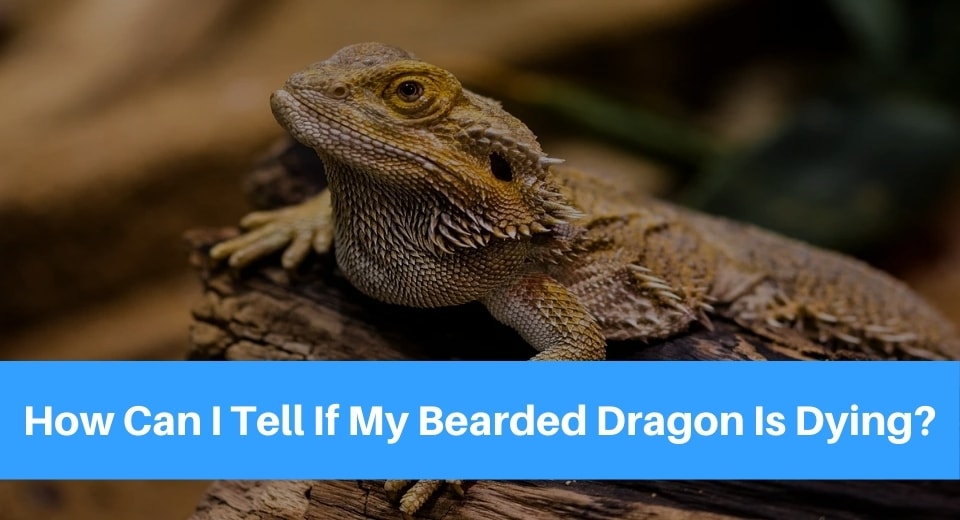 Despite our best wishes, death is an inevitable part of a bearded dragon’s life. As owners, we do our best to make sure they stay healthy and happy and live long, and full lives. Although we try our best, old age will always catch up to them if they don’t grow ill first. Here are a few things to watch for if you’ve ever asked, “How can I tell if my bearded dragon is dying?”

Bearded dragons are strong creatures made of thick skin, both literally and figuratively, but they’re not invincible and they grow weaker as they grow older.

Their lifespan in the wild is only known to survive around 5 to 8 years long. However, their lifespans can double when they’re kept in captivity, averaging 8 to 12 years long, some even exceeding 15 years with expert care.

Unfortunately, not every bearded dragon will live the full 12 years. Since bearded dragons cannot communicate their needs, it’s up to the owners to observe and learn for themselves.

Signs to Look Out For

When your bearded dragon feels unwell, it’s easy for it to spiral to worse conditions. Fortunately, they will usually always show signs of ill-health and, if you catch these early, death shouldn’t be inevitable. You’ll notice something is wrong through their appearance and behavior.

If you’ve had your bearded dragon for years or just two weeks, you should already have an idea of their usual activity levels. When you see them moving slowly or with less activity throughout the day, check if their enclosure’s temperature levels are good. If it doesn’t change anything, they could also be shedding or preparing to brumate, which is the reptilian version of hibernation.

Open-mouthed and labored breathing can be caused by improper temperature and humidity levels or a respiratory infection. You’ll know that it’s because of excess heat if you notice them trying to escape the tank or hiding from the light. If not, have them checked immediately for infections.

Bearded dragons should have bright and clear eyes. If they look dull, dry, or sunken, this means they’re suffering from dehydration. Giving them water, both to drink and for their skin, should help prevent its condition from growing worse.

Adult bearded dragons don’t eat as much as juvenile and baby beardies. However, they should still be eating their regular amount for their feeding days. Lacking an appetite can be caused by stress or by improper tank temperatures. Their vivarium should be warm with a healthy dose of UVB light.

If your beardie has stopped defecating, or if their stools are different from normal, this is a red flag. Not releasing anything can be caused by impactions in their digestive tract, while stools that are too watery or accompanied by blood could be due to parasites, a bad diet, or improper habitat conditions.

Metabolic Bone Disease (MBD) makes it difficult for beardies to move and control their limbs. Any tremors, deformation, or trouble catching live food could be caused by MBD or Impaction. You will also notice this if they do not move away from a cold spot for a considerable length of time. Immediately consult your vet on your next step.

Mouth rot and fungus growing on their skin are obvious signs of something wrong. Do not waste and immediately seek treatment. If its skin appears wrinkly and doesn’t immediately smooth out after pinching it, it’s another sign of dehydration. If they’re not in the process of shedding but their skin is grey, this is another huge concern.

If the unthinkable has happened and your bearded dragon has passed, there are some other signs to look out for. It’s important not to be hasty when declaring their death because their appearance while bruminating is similar to how we’d imagine them in death:

If you see many of these signs yet still detect a heartbeat, it is not a reliable indicator of life. With reptiles, the brain can die even as the heart continues to beat for a few more hours. If this is what you’ve observed but are hesitant to call their death, you should consult an expert.

There are many reasons why a bearded dragon might be dying and it’s important to be on the lookout for anything abnormal. While each case is different, here are some common causes of a beardie death.

Impaction is extremely common and it occurs when your bearded dragon swallows something that causes a blockage in the digestive tract. This blockage can be anything from large food items to loose objects around their habitat. The rule of thumb is to never leave anything that they can swallow lying around, especially if it’s larger than the space between their eyes.

There are a wide variety of infections to watch out for. These usually show up in obvious visual signs, such as inflamed body parts or an abscess.

Bearded dragon infections tend to worsen exponentially. As soon as you detect it, bring your beardie to the vet immediately. Avoid any possible infections by keeping their enclosure clean and free from foreign objects.

Metabolic Bone Disease (MTB) is common in captive bearded dragons because they have less natural sources for the calcium they need.

Bearded dragons are strong but, when lacking in calcium, their bones grow brittle and weak. In severe cases, untreated MTB can cause death. It’s important to ensure that your beardie’s diet includes essential supplements for their health. Installing UVA and UVB lighting can also aid calcium synthesis.

Egg binding is only applicable to female bearded dragons and it only happens when they stop laying eggs, voluntarily or involuntarily.

When female beardies can’t find a suitable nesting site, they’ll refuse to lay their eggs, growing large in their bodies and getting stuck, leading to death.

You’ll know your female is refusing to lay eggs if their belly area swells and they show anxious behavior. To avoid this, contact your vet on how to supply them with a suitable nesting site.

To prevent this, you can use Vitamin A alternatives, like beta-carotene, that are easier to process. As much as possible, keep them on a well-balanced diet.

Overheating occurs more often with bearded dragons in small enclosures due to an insufficient temperature gradient.

When your bearded dragon overheats, it can cause stroke and death despite it being easy to prevent by using the correct bulbs and tank size. You’ll know they feel hot if they demonstrate excessive panting and are trying to leave the tank.

It’s important to keep a close eye on your bearded dragon since reptiles are wired differently than mammals. We associate death with unnatural stillness and the lack of a heartbeat but it shows differently with beardies.

Losing a loved pet, no matter how long they’ve been in your life and the impact they’ve made, will always be upsetting.

Know that, even though they’re sick, they’re still alive and have a fighting chance at life as long as you act quickly. When in doubt, take the safe route and consult an expert immediately.