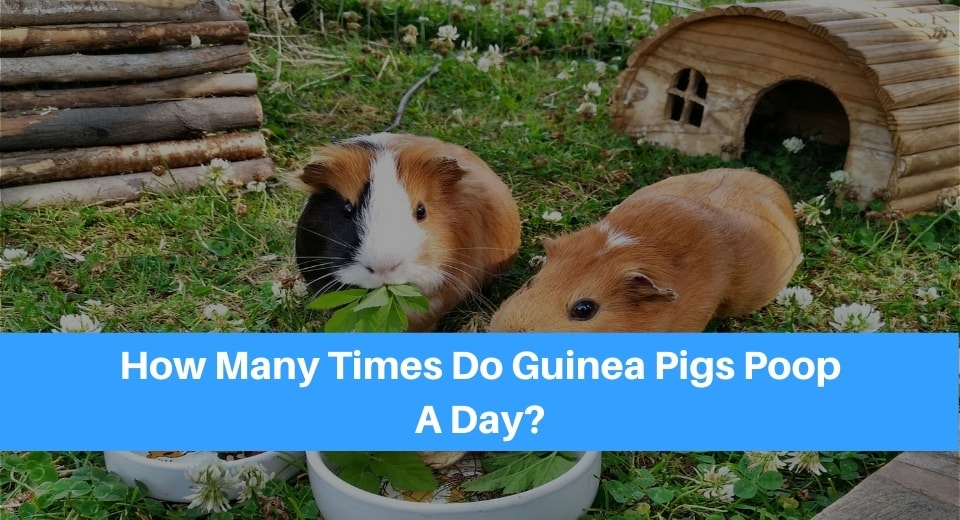 Guinea pigs are some of the cutest indoor pets anyone can have. They’re great but it can’t be ignored that guinea pigs aren’t very particular about keeping their space clean from their droppings. If you’ve had to clean their bedding multiple times a day, you might be asking yourself exactly how many times do guinea pigs poop a day?

This all boils down to guinea pig nature and metabolism. It’s part of their nature to remain active throughout the day and night, to be playful, and to eat and drink a whole lot of food and water.

Guinea pigs love to eat. As long as it’s vegetarian, they’re likely to munch on any food they come across. With other breeds, pet owners who need to leave them alone for some time will leave their pets with enough food to last the day. This works with some but it definitely won’t do with cavies! Guinea pigs don’t have the restraint of pacing themselves through their food supply, they just eat as much as they can.

To grow into a healthy guinea pig, experts recommend a diet of hay, guinea pig pellets, fruits, and vegetables. A hay supply is a necessity in caring for guinea pigs since it plays a part in every aspect of their lives. One way it helps them is by chewing on hay to help them manage their continuous tooth growth.

Guinea pig pellets will also be good since these are full of the nutrients and vitamins that guinea pigs need, especially in a domestic setting. Feeding them with pellets helps you ensure that they’re receiving proper nourishment. As a treat, you can also give them fresh fruits and veggies to make them happy like a kid on Halloween.

By consuming and exercising so much, it’s only natural that they relieve themselves often throughout the day. It’s unavoidable and extremely common to go home to find your guinea pigs have soiled their beddings again with their own droppings.

Do Guinea Pigs Poop A Lot?

Yes, guinea pigs poop a lot, and noticing that they do it often is not usually cause for concern. The frequency of their excretion will vary with each guinea pig and will differ according to their age, general health, diet, and exercise. Once you have a feel for the average number of times that your cavy goes to the bathroom, observing their poop patterns is a much easier job.

If you’re still thinking that your guinea pig poops well over 50 times a day and you believe it can’t be normal, you’d be surprised!

Guinea pigs, on average, are known to poop around 100 times a day, with their droppings found everywhere they’ve gone. Fortunately, you won’t need to clean it every time they leave something behind, simply checking up on your cavies every 8 to 12 hours is good just to make sure they’re surroundings are clean and that nothing has stuck to their fur and soiled their bedding.

It’s actually more cause for concern if your guinea pig poops less than it should since their poop is one great way to check on their gut health and diet. Even if they do poop often, it might still not be a good sign if their droppings have a different look, shape, texture, and smell to it. As with all living creatures, they can have healthy poop and unhealthy poop.

Not all guinea pig poop is the same but which ones are a good sign of health?

The healthy guinea pig droppings have a medium to dark brown color that isn’t noticeably wet or dry. It should also be consistent in looking like oval-shaped pellets. There shouldn’t be an overwhelming smell and, as much as possible, the droppings are also in similar size.

Healthy guinea pig poop can also have a muddy green with oval-shaped pellets. If you see this kind of poop in their habitat and you’re too busy to clean their cage, it’s safer to leave this with them. When cavy droppings look greenish, these are most likely cecal pellets, which are extremely nutritious and safe for guinea pigs to reingest. Yes, some guinea pig droppings are healthy enough to eat again!

Several poop forms could be cause for concern for responsible cavy owners. This can be a sign of a bad diet for the day or could signal more serious underlying problems. Either way, seeing the following kinds of poop will require some change in your guinea pig’s routine.

Smelly guinea pig poop, especially when it’s obviously wet and very soft, points to a nutritional issue. Often, this happens when the cavy eats too many watery vegetables. If the smelly droppings happen over and over again, they could have diarrhea and require immediate veterinary action since this can be deadly for them.

Lastly, sometimes guinea pig drops are bloody. It can look similar to healthy poop at first glance but this one is redder and darker than normal. Blood is an immediate sign of danger and should similarly be taken immediately to the vet.

To avoid finding less than healthy guinea pig poop, make sure they have enough water, hay, and nutritious food. Anything more or less than recommended is not good for their health.

Guinea pigs are, originally, prey animals. Their survival instincts that kept them safe from predators are still alive in them.

They don’t like being seen by potential predators and, in turn, guinea pigs love being in the dark. They feel safe in the dark and can only comfortably relieve themselves in the darkest parts of their space.

To replicate this feeling of safety, you must prepare a nice, dark place for their toilet. The darker this space is, the better for. It’s also recommended to make sure other areas in their space are full of light, to help condition them into only relieving themselves in the designated area.

Another unique thing about guinea pigs is that they poop where they eat. They excrete what we’ve consumed soon after eating it, often in the same area where their food has been placed.

Since pooping by their food and water bowls is such a huge possibility, it’s recommended for you to place their food bowls near the designated litter area . This will help them narrow down the area with which they relieve themselves. This also keeps their mess contained and minimizes the area you’ll have to clean in their cages.

3. Line It With Bedding

Guinea pigs love their hay and they don’t just eat in it, they also love leaving their droppings hidden in it. To optimize toilet and litter training conditions, it’s best to line your designated litter area with natural bedding, using paper or aspen bedding.

It’s best to set the bedding in a litter pan that fits your area as much as possible, layering it first with the newspaper before adding the bedding and hay. Using a tray makes for effortless cleaning of their area since you’ll only need to pull out the tray to clean it before returning it to the designated area.

It must be surprising to learn that guinea pigs poop so often! Luckily, it’s only one of the very few possible cons to all their pros as a pet.

Guinea pigs are great pets that come with a lot of responsibility. Fortunately, all your efforts as a cavy owner are worth it once you see these guinea pigs wiggling in happiness when you get home after a long day at work.